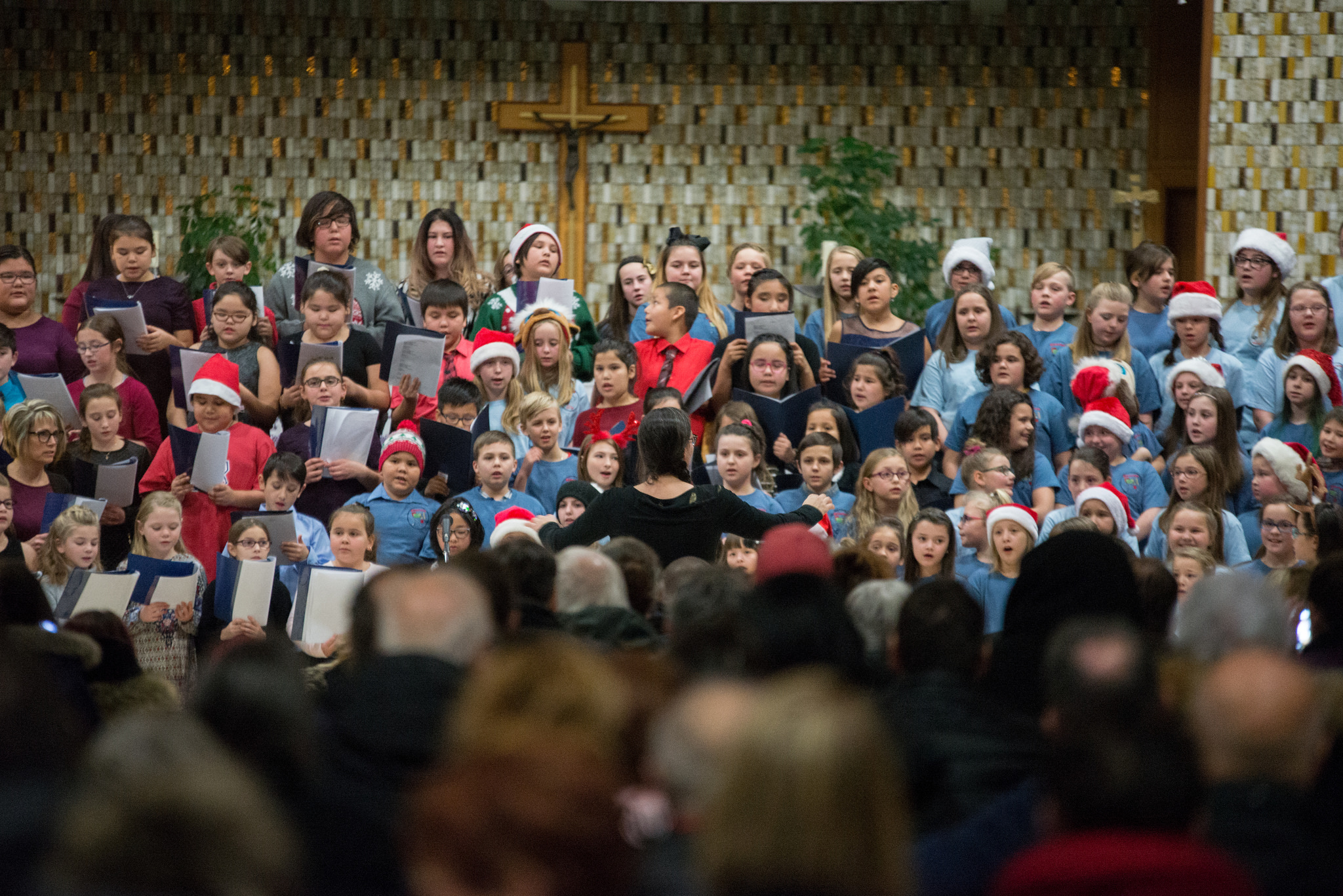 “ Wonderful! We hope to see this every year “ - Member of town council

In recent years, Community Learning Centre at Flemming Elementary school has been working to  making the school more accessible and inclusive to the community, and to expose students staff and community to different cultural activities. To accomplish this, a variety of activities and programs are being developed with the collaboration of local partnerships. For the 2017 holiday season, four schools, from three neighbouring communities, came together to share their cultural heritage with the larger Sept-Iles community.

This project allowed students to share their culture with other students, their families and the community.  In addition to learning songs in their primary language, students each learned a song in each of the other two languages, so that all chorists sang together for three songs (in English, French, and Innu).

In addition to allowing the students to exchange with one another, the performance was a huge success in bringing community together, with over 1000 people in the audience as families, grandparents, community members gathered to see the choir perform.

“It was very touching, made me emotional “ - parent from Johnny-Pilot

This event was also featured in Le Nord-Cotier newspaper, in French: http://lenord-cotier.com/chorale-a-3-voix-les-cultures-se-rassemblent-pour-un-soir-seulement/

The Internet can be a great tool for learning in more ways than one – and not just for our students. At Quebec High School, the students are the ones doing the teaching: the teens’ technical savvy is being put to good use through a series of workshops offered to local seniors on how to navigate the online world. Throughout February and March, nearly 30 students at the Quebec City school have been teaching seniors how to use an iPad, watch videos on YouTube, use Facebook and shop online. The workshops are held within the framework of a leadership class taught by Fannie Marsh at the school, and are the result of a partnership between QHS, Voice of English-speaking Quebec and the Community Learning Centre at the school. Here’s how they work:

The workshops take place (in English) in the high school’s library.

They are student-led: at every workshop, two to three students make a short presentation, then put what they are teaching into use.

The seniors (usually numbering between five and 10) practice on the school’s computers and iPads.

Heather McRae, from Voice of English-speaking Quebec, supervises the workshops.

Marsh told the Quebec Chronicle-Telegraph that the initiative empowered the students, especially since they were teaching to people older than themselves. And, although the workshops initially were only planned for February, they were so well-received by both the students and seniors that they extended the series to March. The last workshop, called “Internet 101,” takes place on March 26. To read the Quebec Chronicle-Telegraph, click here (subscription required).

Families and community members have a better chance of succeeding when access and awareness to social services are within their reach. The creation of CLC Community Nights across the entire New Frontiers School Board territory has been nothing less than remarkable, in helping achieve an inter-sectoral family and community support program.

What started in October of 2009, as “Community Wednesdays” and held initially at St.Willibrord School (Chateauguay CLC) has grown into school-community partnerships and generated similar evenings such as “Les Soirées Communau-T Haut Saint Laurent Community Nights” (Chateauguay Valley CLC ) and “ les 5 à 7 communautaires”(Valleyfield CLC) both operating since 2014 . The longevity, evolution and transferability of this concept, in our holistic/regional CLC approach exemplify positive collective impact.

These monthly partnership evenings strive to establish bilingual themed opportunities, to reach citizens in a family-friendly format. Administered and organized by our CLC Development Community Agents alongside their respective cross-sectorial organizing committees, they are founded on solution-based strategies such as:

- activities for kids all under the umbrella of a “trusted” roof (the school) at one time in one spot.

Last year (2015-16) 12 community evenings were held across the school board territory, in semi-urban to rural settings – welcoming at least 100 to 500 citizens at every occasion. Since these collaborative projects started, 8 out of 10 elementary schools have hosted at least one community evening within their walls. The CLCs also purposely brought the neighboring French school boards into this initiative, hosting ‘evenings’ in their schools. This helps increase collaboration and out-reach opportunities for multiple partners and the greater community in general.

“Gather people in an non-threatening environment to allow them to meet people and know what services are out there and they get a free meal.” Anick Leclerc, Principal

The New Frontiers School Board is very proud to have found a winning concept and has been recognized by the health and municipal worlds, with awards such as Prix reconnaissance Volet partenariat et collaboration in 2011-2012 from the CSSS Jardins-Roussillon and the 2012 Prix Communauté conviviale et solidaire from Ville et Village en Santé for the city of Chateauguay, just to name two examples.

The creation of student involvement opportunities for volunteering or showcasing their school-based projects and/or artistic talents has helped open the doors of the schools to the social net of family and community based services that surround it. It has shown to local stakeholders new and old that NFSB schools, students, staff and Community Development Agents have an integral role in improving the lives of families in their regions. With a “true” collaborative project, which dictates involvement, ownership and shared responsibilities by multiple partners, it has helped lead to increased: communication, understanding of whom does what on the territory, subsequent new initiatives and even an increased awareness of the existence of the NFSB schools (for some) by local stakeholders of our fundamental role in the betterment of our communities.

One concrete example that happened a few years ago still resonates of the power of awareness: a local battered women’s shelter reminded one of the organizers that, while one evening even if only a few community participants stopped at her table, later that same week three separate women called the shelter, signalling their particular violent situations after learning of their service from that community evening.

High school students from Howard S. Billings High School and école Louis-Philippe-Paré volunteer for every Community Wednesdays in Chateauguay - Anglophone and Francophone students working together. Community services are known more by our population which has led to an increase in translated materials into English for local citizens by our community partners. The fact that groups keep coming time and time again, proves the efficiency of this type of event. It has also led to the creation of a resource video of local services.