What are "counter histories" and what makes this project's collection of histories essential?   The answer is more complicated than it seems (read more below!), but suffice to say that these are histories that are often left out of the official History programs, and which we are trying to include as we build our online program support resources at LEARN.

What are "counter histories" and what makes this project's collection of histories "essential"?

Well, neither term is perfect here, and if truth be told, these terms might hold more weight and significance in projects such as Lisa Taylor's at Bishops here, and as they relate to her Social Justice Competency list here.  First as to the word "counter" which is not perfect, because my intention is not to call out any particular "them and other" relationships, or to note or expound upon opposing versions of stories, between peoples, colonial, indigenous or otherwise, or even between those in power and those who are not.  And as to the word essential, well it's not to claim that one version of history is more essential than another either, and it is not even to say that what I find is essential or significant to any historical narrative, even to the narrative of the people I am researching.

Actually, my goal here is a much simpler one, and really just one I hope can find a practical (and personal) use for students in the specific Secondary 3/4 history course in Quebec. Essential stories for me are really those stories that have somehow been forgotten, or that have been marginalized in our present programs, but when found suddenly add (at the very least!) perspective.  i.e. The study of history requires perspectives, that is what is essential.  And, it is essential to continue to look beyond what is being taught in our courses.

In Quebec, our specific version of the History of Quebec and Canada outlines a version of history that we know well enough, and even one that most people can relate to, at least on certain levels, as it primarily deals with well-known and uncontested subjects. However, as with every program of study, and in this case with every national narrative that gets distilled into a vision of how things came about, things (events, people, etc.) necessarily get left out.

And so, quite naturally, anyone who actively and critically engages with a particular study of history will (and should) notice gaps.  They will notice what is not mentioned, or perhaps just notice the ways in which what is mentioned is done so in a way that is inadequate or that skews the perception of how things evolved.   Similarly, no two critical individuals will notice the same gaps or the same deficiencies, and in that way, each researcher/critical student/teacher will supplement the program in different ways.

Over the last few years, Matt Russell (WQSB) and I (Paul Rombough @ LEARN) have been creating learning scenarios and accompanying document collections for the new History of Quebec and Canada program.  (Secondary 3 and 4 teachers access this page

)  And as we curated materials for the prescribed areas of historical knowledge, we couldn't help but go off on tangents, recognizing and listening to multiple voices, exploring interesting new (and sometimes controversial) sources, information, facts, people, places.  And in the process, we have inevitably encountered other perspectives that were either not specifically targetted by the program or which we felt were not developed in full,  but which in the end we found to be essential, at least to the way we had come to understand and interpret that period in the past.

Undoubtedly, these additions to the materials we share provincially cannot help but reflect our own personal choices, which in turn necessarily emerge from our own experiences and also even own cultural backgrounds.  In some cases, the examples we find are indeed true "counter" stories to the seemingly restrictive lists of Quebec program content. But, whether that is the case or not, for sure the tangents and discoveries we follow emerged naturally, out of the process of ... identifying historical actors and witnesses, of considering situations in place and in time, of identifying contexts, causes, and intentions, i.e. through the very act of developing the competencies the program so emphatically describes:  to characterize periods in time and to interpret social phenomena! (See page 9 here)

Previously, in our Secondary 3 provincial training session on the program content for the new history program (See page 15 here), Matt and I (and many of you!) noticed many specific "opportunities" to broaden the essential knowledge lists.  I know there are indeed a few groups still missing amongst the sections below (ex. LGBTQQ++), and for some that are there I am still hoping to expand upon them, to listen to and develop resources based on specific voices within those sections (eg. Indigenous, English-speakers) but here at least are a few potential essential counter histories we have already begun to trace and that have already found their way to our document collections.

From the earliest explorers to slaves in New France, to migrations from the United States and elsewhere,  The threads of Black history in Canada are varied, often lost in the margins, too often mentioned but not uncovered in detail.

Links to various examples of the traces we have curated for our document collections are now also available online, in a dedicated section on LEARN:  Go to page

Links to our tracing document of various examples in the program... coming soon here.

"It must be acknowledged that there is not a homogenous Indigenous worldview, and that each Indigenous nation or community will have their own worldview." (Source: ICTinc.ca) And so, while one can (and should) recognize common elements, and reasons why we all need to admit to a similar and often shared experience of indigenous peoples as a whole in Canada, one cannot really say there is a single indigenous history to be mapped into a single document. Not when, for example, even within our borders we can count so many different languages (50+), cultures, and societies.

Again, though our HQC program does refer to and examine many contributions of a variety Indigenous peoples to our shared history,  often leaves other examples out, and these the active historian can find and dig further to try to understand.  That was our experience, and so as we worked to research different individuals, groups, and events, we try also to note down the times we veered from the program's specific choices (as concerned indigenous history or histories) and have added these references to many other time periods and phenomena throughout.

Links to various examples in our collections... coming soon here. 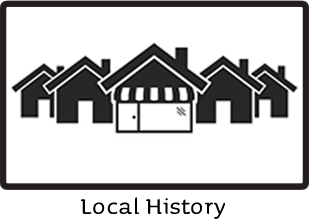 Very often some of the best sources for historical information you can find on the internet come from local historical societies, museums, individuals from the area who have a story to tell.  The program covers many regions, but sometimes it doesn't mention what is just next door.  Or sometimes it's perspective is a larger national or cultural one, and then you find another perspective to add!  Local history can also make learning about history more interesting! 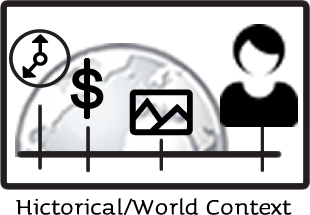 Some criticize provincial programs because they seem to follow a set narrative.  But the new program allows for an exploration of broader contexts, via the competencies, but also through specific examples.  Of course, you might want to expand on a "fact" by including other historical/global contexts not mentioned. 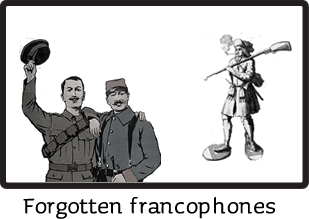 How could Francophones be forgotten by a Quebec history program?  Well, every narrative leaves out mention of certain players, and this one is no exception.  From French settlers in other parts of Canada, to unexpected businessmen under the British regime, to French-speakers fighting for Britain and its allies in World War One.  The stories are many, and worth telling as much as any other. 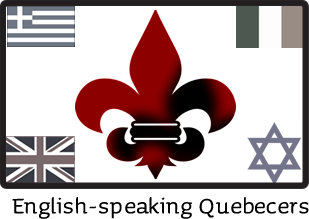 Not last, and certainly not least, because the list goes on and on.  And indeed this category of stories could be divided and subdivided many times over.  For now, let's say there are many opportunities to explore the experiences of English-speaking Quebecers who are often left out. Think: Irishmen who fought alongside the Patriots, or English-speaking artists during the Quiet Revolution, or simply the notion that not all Englishmen were men of power during the British regime, Irishmen neither, and there was the Jewish populations who thrived, but also those who did not.  Where are they, these pockets of English culture throughout Quebec?  These cultures that thrive in the interior of a very different province, to ultimately become someone very different from those other English speakers on the other side of any of our borders.