Are you an educator looking for teaching resources and Professional Learning opportunities? LEARN is here to help you.
SUBJECTS
Learning Resources to help you and your students

Are you a student in need of help with homework, studying a subject, or information about our online classes? We can help!
I WANT TO LEARN
See the areas in which you can improve your skills.

ONLINE TUTORING
Homework help and tutoring sessions, at no charge, based on your needs.

SPECIAL NEEDS
A curated list of resources for Parents

WORK-ORIENTED TRAINING PATH (WOTP)
This program offers students the learning environment and support they need to enjoy learning at their own pace.

Squishy Circuits - Scaling Back and Moving On

After Ephemeral Explorations and Clay Play (Art) followed by Marble Run (Engineering), it was time to infuse a bit of technology into the mix of explorations. So the teachers tackled electrical circuitry through Squishy Circuits. Go to site 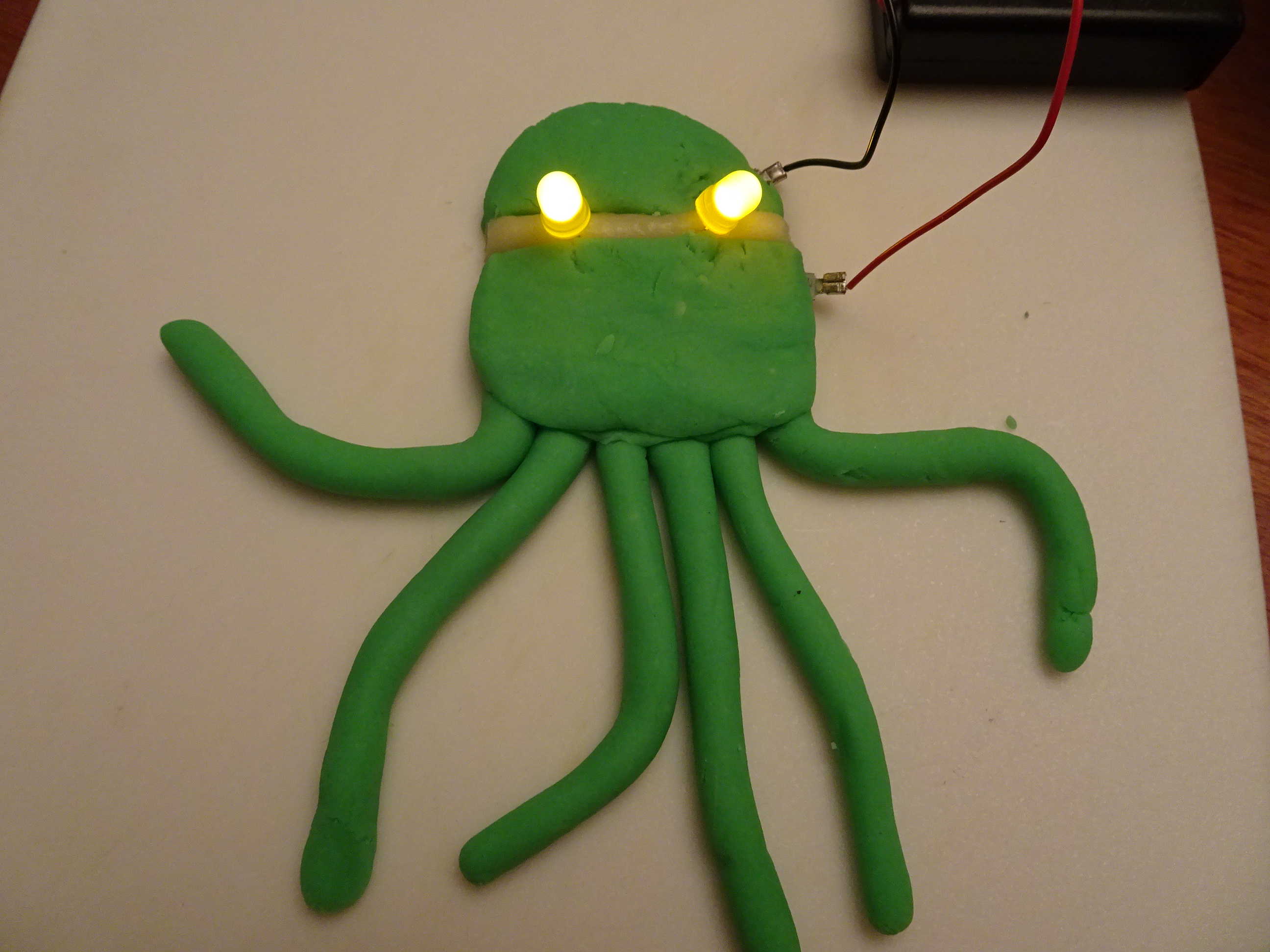 Squishy Circuits are so named because the wires used in a regular electric circuit have been replaced by malleable conductive and non-conductive dough. This makes it possible for young children to play with electric circuitry and create any number of things that light up or buzz. All that is needed is a 6-volt battery pack (or a 9-volt battery), wires with alligator clips, a collection of LED lights and a low voltage buzzer. The conductive dough is salt based whereas the non-conductive dough is made with sugar. Download

Learning Not To Get Your Wires Crossed

With electricity now on the menu, the teachers were really entering unfamiliar territory. Electric circuit, parallel circuit, series circuit, short circuit, polarity, conductor, non-conductor: these concepts were eventually used to describe what was happening as they connected dough and parts and tried to solve the problems they encountered.

Like many adults in unfamiliar territory, relating abstract concepts or representations to the concrete situation they were tackling did not come naturally and flawlessly, with the result that they still felt unsure after an afternoon of exploration. They definitely needed more time to come to understand both the workings of Squishy Circuits and their potential for creative use in a variety of contexts. They used on-line documentation (Go to site

) as supplemental learning tools for themselves, but ultimately found that they needed to learn from the classroom experience.

To create interest, they use an “Energy Stick” ( Go to site

) which lights up and buzzes when a circuit is created by holding it with two hands. It still works when several people hold hands and close the circuit on the stick. Its sensing circuit is so sensitive that it can detect the smallest amount of electricity that travels across the skin.

They discussed where electricity comes from and what it’s used for… a power outage happened just at the right time in one of the classes to spark interest! They listed all the appliances they knew that require electricity in some form or other. A discussion about batteries even led to talking about how to dispose of them properly and talking about environmental issues. Books were also used at key moments. ( Go to page

) They also read the book: Oscar and the Cricket. ( Go to site

) to guide the children through a discovery process of the different facets of circuit-making with conductive dough. Some children expanded the exploration trying to make their own shapes that light up or adding a buzzer to the circuit. In some cases, they were given an additional challenge such as “Can you create a layer cake with a light or a buzzer?”

Initially, one teacher thought she would have them do the first activity and stop because she anticipated that it would be hard for them to do. This was not the case, however. They worked through the booklet quite quickly. They were easily capable of following the visual instructions and resolving the problems that arose and move from one activity to the next at their own pace.

An activity to tease out the idea of conductive and non-conductive materials was organized with objects brought from home. ( Download

) They tested what happens to a circuit when a non-conductor is inserted. Then they made the connection to the circuit they had made with the Energy stick. They tested what would happen when they wore gloves or mittens or when holding the stick through a sleeve. They discovered this broke the circuit just as much as when letting go of one end of the stick.

But they expressed no drive to continue exploring or working with the materials. In the eyes of the teachers, the activity never really took off as it did for their Clay Play and their Marble Run explorations. Most of the children were not driven intrinsically to play with the materials. In some cases, they even expressed resistance when the materials were brought out. Just a few, those “scientifically” minded (in the teacher’s words) and curious, seemed to really enjoy it and even tinkered to modify the circuits.

It is of note that the teachers provided much less visual documentation for this exploration which reflects the relative paucity of the experience for the children.

From the teacher’s point of view, this exploration was more challenging for a variety of reasons.

From the children's point of view:

The step by step discovery process, i.e. following instructions to build a series of more and more complex circuits, is not in and of itself something that should be shunned. It’s one way for the children to learn basic skills and gain some insight. As well, following visual instructions and reading plans is an important aspect of literacy development in general. The challenge for the teachers is how to put that learning in a context that provides occasions to use it to invent new and interesting “stuff”!

The teachers had experience with past projects in their classes which provided examples of ways to approach that question. They have experience with “Take-apart” centers: a place where they provide real tools and a variety of materials to take apart. This might be followed by a sorting activity, after which they might build something new and creative with the miscellaneous parts. This year, Natalie provided electric and electronic things. They uncovered wires, circuits, batteries, and plugs, and they marveled.

Now, rethinking about this, she could see how inserting a Squishy Circuit exploration into the mix would allow them to add a live electric component to their creations: add a doorbell buzzer to the house they built or light up the window of their recycled spaceship, for example. It would certainly be challenging, but so was their marble run building experience. By providing ample time for building and problem solving and by keeping the Squishy Circuits in the creative mix as long as needed, their experience could be new and exciting.

Experimenting through smaller guided explorations provides the prior knowledge for the children to understand the workings of squishy circuits enough to lead to later meaningful creations. The same can be said about the teachers who found that they spontaneously stayed within the limited context of following instructions to build Squishy Circuits in order to understand and become comfortable with them before they could see what could be done with them further. Christiane summarizes the sentiment well:

"It’s fabulous that kindergarten children are trying this and just see a light turn on. Even if the exploration is not at another, deeper level, this is still great for kindergarten. It’s all right to stop there, because, as a teacher, I’m not ready yet to take it five steps further and to connect it to something else like robotics or engineering. I need more time, myself, to see what I would need to do to make it work. New teachers can’t make those connections. They need a chance to get ready, knowing that they will need to take it to another level."

This exploration also highlighted the importance both of professional development and working within a community of supportive peers.

"The beauty of this experience lies in the daily discussions that I was able to have with someone who was doing it with me, someone who was not judging my practice which was not totally up to the level that it could go with the project.  To start with, I couldn’t picture myself bringing this to another level of creativity. I needed to do it simply as it is to be comfortable with it. We need a safe environment with non-judgemental peers to work it through. When this happens, we are fed by others and we can grow."

1- Building Squishy Circuits: How to - Go to site

6-  Alpert, Barbara (2011) Electricity All Around (Science Builders). Pebble Plus

Waring, Geoff (2011) Oscar and the bird. A Book about Electricity. Go to site

© 2020 LEARN. All rights reserved.
PLEASE SIGN UP
TO RECEIVE OUR NEWSLETTER LEARN News, tools and resources, delivered 9 times a year to your inbox. Thank you!
Please check your e-mail
to confirm your subscription. YOUR EMAIL ADDRESS (REQUIRED) YOUR FIRSTNAME (optional) YOUR LASTNAME (optional) I AM an educator a student a parent a community partner SUBSCRIBE Please provide a valid e-mail address Please specify who you are