How to interpret a picture?

Interpreting pictures is an essential technique in the social sciences. Pictures can be either photographs, paintings, drawings, caricatures, etc.  Pictures, like other historical documents, reflect the societies that produce them. Historians and geographers can use pictures to get information about these societies, and about people, places and events that happened in the past. 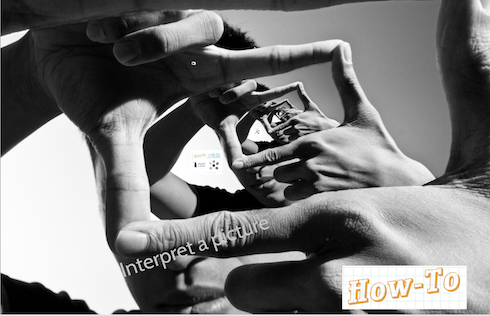 View some suggested steps in the videos below.

Start by considering the YOU in your first impressions of a picture, how you react, what it seems like for you.

Whether it's a photo, a drawing, a film or a painting, pictures are documents you see first, and then understand. And so, the first step in analyzing any image is to consider what you are looking at, but also through which "lenses" you are perceiving it.

Considering who you are, and working through your first impressions is a starting point. After that more complex techniques for interpreting a picture can be used. Read through the other steps to interpret your picture more fully, like a historian, like a detective, and like a traveller in time!

Whatever the topic, whatever the subject area, a picture tells a story, and has a story of its own. Historians go through a process in order to interpret things like pictures and other documents. And they note their findings as they go along.

Their "historical method" demands they begin by thinking through the problem of the picture itself. They ask, Is the image a direct, accurate representation of reality? They describe the image in terms of what is going on, what impression it gives, who is doing what. Part of that exploration includes the making of "inferences" or assumptions.

There are a lot of things to note down about the image: its title, its author, etc. And eventually the questions you start with and you develop might need to be answered by additional research, or by comparing it to other images and other writings. Historians "investigate" further, not relying on their own impressions alone.

Historians use ways and tools for organizing their questions and the documents and the answers they find. Some tools, mentioned in the film above are provided here:

The picture represents pieces of a reality. Zoom in to investigate each piece. What can you say about what you find? Look for details and with those build the story.

Another strategy is to block out sections and try to anticipate other sections, even draw the rest of the scene yourself.

And whether focusing on existing parts or imagining others, think of those parts in terms of different "aspects" of the society or phenomenon represented. For example, does one part of the image tell you something about the economics of the times, of the social life, of their religion? Is their anything of politics or of power struggles going on?

And finally, as stated earlier, investigate the scene further by finding and comparing the picture you have with other pictures you find. The important notion here is that your picture must be decoded in terms of the other "contexts" of its time, and even the contexts of the time in which it was created! Do the puzzle pieces of other pictures suggest anything new about your picture? Do other realities "contextualize" your picture's reality, in ways that give it a new meaning, a new sense?

When you see a picture, you see an event, a person, a place in the world. But in another sense that image, that reality, also existed in time. (Sometimes in two times, when you also consider the date the picture was made.) To interpret a picture, you need to consider "when" things happened, and remember what you know about life back then.

Think in terms of time "periods" too, like the time of European contact, or the French regime, or the 1980s, or the now! Map out what you know about that picture, in terms of other realities of that time, and how they might relate. Plot your picture on a timeline, along with other examples of what has changed, and of continuity, that is, of what has in fact carried on and stayed pretty much the same.

© 2023 LEARN. All rights reserved.
PLEASE SIGN UP
TO RECEIVE OUR NEWSLETTER LEARN News, tools and resources, delivered 9 times a year to your inbox. Thank you!
Please check your e-mail
to confirm your subscription. YOUR EMAIL ADDRESS (REQUIRED) YOUR FIRSTNAME (optional) YOUR LASTNAME (optional) I AM an educator a student a parent a community partner SUBSCRIBE Please provide a valid e-mail address Please specify who you are