The best CLC projects are the ones that take off (almost on their own) and become a beautiful independent thing!

M. Laplante is one of Laurier Macdonald’s Secondary 4 teachers in Français langue d’enseignement. Like many high schools, students go to school in the neighbourhood of Saint-Leonard but do not necessarily know the community and the people that live and work there. Seizing on a meaningful opportunity to build community connections, M. Laplante challenged his students to get out of the classroom (and their comfort zone) and to go out into their community to find someone interesting that they would conduct an interview with and then write it out as an article that he could evaluate. 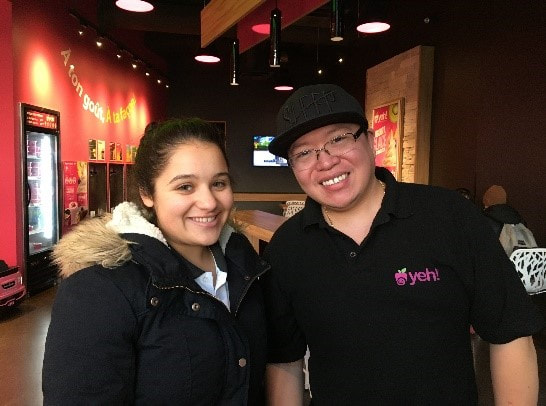 There was such a wide range of businesses solicited and many people were interviewed including a daycare provider, a bank manager, a photographer, several restaurant and shop owners, a city park employee, a clothing manufacturer and a packaging supplier.

Students were marked on the quality of their French production, their interview style and whether or not they included a photo of their subject. As the project developed, an opportunity for student voice presented itself when students decided to create a blog entitled Lmac à la rencontre de son voisinage to share their interviews with a wider audience.

This was such a rich and creative project! The students were tasked with getting out of the classroom to get to know the neighbours. The competencies they developed were not only those of language; they had to meet strangers, introduce themselves, make a good impression and solicit time and information, as well as make a good enough impression to get a picture. The students realized that this wasn’t only an assignment for marks, but one that actually had them using skills they will need throughout their lives.

© 2022 LEARN. All rights reserved.
PLEASE SIGN UP
TO RECEIVE OUR NEWSLETTER LEARN News, tools and resources, delivered 9 times a year to your inbox. Thank you!
Please check your e-mail
to confirm your subscription. YOUR EMAIL ADDRESS (REQUIRED) YOUR FIRSTNAME (optional) YOUR LASTNAME (optional) I AM an educator a student a parent a community partner SUBSCRIBE Please provide a valid e-mail address Please specify who you are